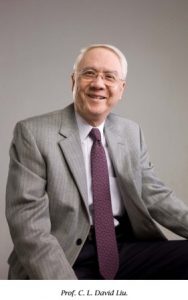 We at the State Key Laboratory of Analog and Mixed-Signal VLSI are very sad to have learnt that Professor Chung Laung (David) Liu passed away on 7th November 2020. He was a great promoter of Science and Technology development in Macao in the last 2 decades. He visited our Lab personally for several times, encouraged many of our colleagues to strive for scientific excellence. He was a role-model and an inspiration to us all. He will be remembered here for long.

The State-Key Laboratory of Analog and Mixed-Signal VLSI, University of Macau

The Institute of Microelectronics, University of Macau 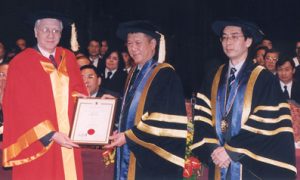 Although university level studies in Macao have a long and old tradition dated back to 1594 with the foundation by the Jesuits of the former St. Paul’s University College, that still constitutes today the most famous “ex-libris” of the Territory, they had a long interruption since the 17th century and until the creation of the University of Macau in 1981 (initially designated as University of East Asia), leading local higher-education institution, and one of the oldest universities in the Pearl River Delta Region, which can be truly considered the heiress of the original College.

In the second-half of the 20th century, the fast emergence of Science and Technology raised the interest of the young and the brightest minds of that time for pursuing university studies all over the world, and Macao was not an exception, but due to the non-existence of a local university, those young talents had to demand other places with the inherent difficulties of studying far away from home, but their resolve and ambition to follow their passion and to succeed were greater than anything else, and they left.

Prof. Chung Laung Liu was one of those young and bright talents graduated from the prestigious Choi Kou Middle School in 1952 and, I will not be mistaken if I affirm that he was for sure the one that has achieved the most in his long career, namely in Taiwan, USA, Japan and Hong Kong, as I will try to demonstrate briefly next.

After his secondary studies Prof. C. L. Liu followed a Bachelor of Science in Electrical Engineering having finished his graduation in 1956, in the National Cheng Kung University, in Taiwan. But, this was just the starting, because later he departed to the United States where he was admitted in one of the top universities in the world, the famous Massachusetts Institute of Technology – MIT, where he got an additional Electrical Engineering degree and a Science Master in the same field, both in 1960. Almost immediately after in 1962, in an extraordinarily fast period of studies at the same university, he concluded his Science Doctor degree.

But, it was really in 1962 that the amazing academic career of Prof. C. L. Liu has concretely started and there is no better way to describe it than by enumerating his successive appointments and achievements.

Prof. C. L. Liu has also held several temporary Visiting Academic and Research Appointments in quite diverse and prestigious places all over the world, that clearly demonstrate the professionalism at high-level of his academic and scientific work, from which it would be worth to mention the following universities: Harvard (1971), Technical of Berlin (1972 and 1973), Paris XI (1979), Pisa (1980), Autonoma Metropolitana in Mexico City (1981) and National of Singapore (1982), besides National Tsinghua in Taiwan (1995); and also other research institutions like: MITRE Corporation (1963), Jet Propulsion Lab from NASA (1969), IBM T.J. Watson Research Center (1971), Gesellschaft fur Mathematik und Datenverarbeitung, from Germany (1976), Institute National de Reserche en Informatique et en Automatique, from France (1979) and finally Nippon Telegraph and Telephone Corporation, Yokosuka Electrical Communication Laboratories, from Japan (1985).

Due to time constraints and considering the extension of Prof. C. L. Liu’s CV it would be impossible for me to enumerate the countless Awards and Honors, as well as other Major Professional Activities, but I will point out a few which, according to my judgment, I consider the most important.

Regarding Awards and Honors they can be divided in the two major areas of academic/scientific activity – Teaching and Research, as follows:

In Teaching and Education: the Certificate of Merit, Outstanding Faculty-Staff Member, Dads Association (1983), the Everitt Award for Teaching Excellence, College of Engineering (1983), the Excellence in Undergraduate Teaching Award (1988), all in the University of Illinois, and later, the Karl V. Karlstrom Outstanding Education Award, from the Association for Computing Machinery / ACM (1990), the Taylor L. Booth Education Award, from the Computer Society of the Institute of Electrical and Electronics Engineers / IEEE (1992) and the Education Medal, from IEEE (1994).

In highly professional Technical and Research activity: the Best Paper Award from the 23rd ACM/IEEE Design Automation Conference (1986); the Andersen Consulting Award for Advising Excellence, from the College of Engineering, University of Illinois (1990); the Technical Achievement Awards from, the Circuits And Systems (CAS) Society (1998), and the Real-Time Systems Technical Committee (1999) both from IEEE, for his contributions in the area of Computer-Aided Design of VLSI circuits and in Real-Time Scheduling, respectively; plus the Distinguished Service Award, SIGDA, from ACM (1999), the Golden Jubilee Medal from the CAS Society of IEEE (2000), and the Millennium Medal also from IEEE (2000).

In terms of Major Professional Activities it is even harder to make a selection, but I will try: Prof. C. L. Liu was the Chair of the Statewide Review of Computer Science, for the States of Massachusetts (1987) and South Dakota (1988), a Visiting Committee Member of the Statewide Doctoral Evaluation in Computer Science, State of New York (1990), and has been also External Examiner of major universities in the region, namely, Hong Kong U, Hong Kong Baptist U (Chief), National U of Singapore, National U of the United Arab Emirates, as well as Member of Advisory Committees of the College of Engineering, Chinese U of Hong Kong, the Institute of Information Science (Academia Sinica) and also of the Academia Sinica; Prof. C. L. Liu was a Member of the Executive Committee of Computer Science Accreditation Commission (1985-1988), the Computing Research Board (1987-1990) and the Computing Sciences Accreditation Board (1988-1991); finally Prof. C. L. Liu has participated in Editorial Boards or as Editorial Advisor or Senior Consultant, of several top scientific journals and publishing houses, namely, the SIAM Journal on Computing (1971-1983), the IEEE Transactions on Electronic Computers (Associate Editor, 1986-1990), the Journal of Information Science and Engineering (1991-1998), the ACM Transactions on Design Automation of Electronic Systems (Editor-in-Chief, 1995-1998), the Algorithmica (since 1984), as well as the Computer Science Series (McGraw Hill Book Co., since 1981 and World Scientific Publishing Co., 1982-1991), and the McGraw Hill Encyclopedia of Science and Technology (1994-1997).

To close with a “golden key”, as we say in Portuguese, this brief description of Prof. C. L. Liu’s CV, a short reference to his outstanding publication record, that comprises 8 Books, and more than 200 Papers in scientific conferences and journals, as well as book contributions. From this high-diversity I will mention here only the 3 last Books:

and the 4 last papers, from IEEE Transactions on Computer-Aided Design of Integrated Circuits and Systems (April 2001 and February 2002) and IEEE Transactions on Very Large Scale Integration (VLSI) Systems (February and October 2003), that really demonstrate the high-level of his scientific work, in a highly challenging and fast moving area, where Prof. C. L. Liu continues following, or even leading, the pace of new state-of-the-art developments.

Exactly 50 years after leaving Macao, in November 2002, Prof. C. L. Liu has returned again to his homeland by invitation of the University of Macau, to participate in a Public Lecture integrated in a group of 3 Macao-Raised World-Class Scholars (that included also Prof. Siu Yum Tong – Mathematician and Prof. Alfred Wong – Physicist), based on a suggestion of our Council Chairman – Dr. Tse Chi Wai, himself also a Macao bred distinguished academic, recently returned. The significant theme of Prof. C. L. Liu’s presentation was “Education and I – the Spiritual Path from Macao to America”.

A prominent group of the talented generation from the fifties that has left Macao to study Science and Technology was here reunited again. However, the local situation at the University has also progressed in the positive direction in the past two decades in such a way that in a field close to Prof. C. L. Liu’s scientific area, University of Macau was already producing quite significant research results also at high-level with world-class standards, that can briefly be described by the first 4 Ph.D’s recently concluded in the EEE Department, of our Faculty of Science and Technology, in Microelectronics (from 2000 to 2002), that led to the publication of dozens of papers in IEEE International Conferences and leading Scientific Journals, like the Transactions on Circuits and Systems, Instrumentation and Measurement, Biomedical Engineering, and also the Journal of Solid-State Circuits, besides the excellent achievement of a publication in the world-top International Solid-State Circuits Conference – ISSCC’2002, together with the future Book based in one of the Ph.D’s Thesis, by Kluwer Academic Publishers. Finally, the recent internal creation of two advanced research labs for Wireless Communications (2000) and for Analog and Mixed-Signal VLSI (2003), as well as the “spin-off” company created locally through a protocol between UM and one of the world-leading companies in the field, Chipidea Microelectronics (2001), associated also with the establishment this year of IEEE Macau Section, constitute significant evidences to envisage a bright future for the local sustainable development of Microelectronics, at a high scientific level in the University and in Macao.

Considering, the remarkable achievements of Prof. Chung Laung Liu in his academic and scientific career, and his enormous experience, here and only very briefly presented, contribution that has raised high the name of Macao all over the world, and the scientific maturity exhibited in this area by our University, the governing bodies and academic authorities of the University of Macau were inspired to admit Prof. C. L. Liu as an Honorary Member of our academic staff group, in full confidence that this fact will create an even higher stimulus for further internal development of Microelectronics and other associated scientific areas.

Based on all those assumptions, the Chancellor of the University of Macau, approved the proposal submitted by our Honorary Degree Committee, to attribute the Doctor of Science – “Honoris Causa” to such a Famous Scholar like Prof. Chung Laung Liu.

Honorable Prof. Chung Laung Liu, welcome to our University, actually, as from today, also yours.

Thank you very much! 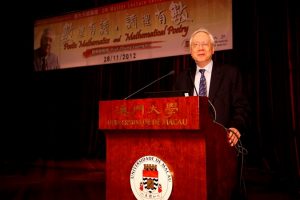 He is the author and co-author of seven books and monographs, and over 180 technical papers.[1][3] His research interests include computer-aided design of VLSI circuits, real-time systems, computer-aided instruction, combinatorial optimization, and discrete mathematics.

In 2004, the University of Macau awarded him an honorary doctorate.[1]